It’s been an April of snow showers and sunshine, and of being able to get out and about a bit more, whatever the weather, allowing us to once again interact differently with the places we live in and the people we share them with. The legacy of the coronavirus pandemic is though going to be with us for some time yet, and will be experienced in a wide range of ways, from people re-assessing what they value most about both the built and natural environment, to practical measures like the need for infrastructure to accommodate changed habits such as, for example, an uptake in cycling. And, as can be seen in this month’s Spotlights, these themes continue to be reflected in what has been happening in the world of planning. On which, read on below…

Appeal against decision to list Aberdeen high-rise blocks – following Historic Environment Scotland’s decision to give category A listed status to eight blocks of 1960s multi-storey flats in Aberdeen in January this year (on which, again see our January Spotlights), Aberdeen City Council has this month lodged an appeal against that decision. In doing this, the Council cites 10 reasons it believes the buildings should not be listed, including the significant challenge this would present the Council as corporate landlord, and the ‘unreasonable additional costs’ this would cause. The appeal will be considered by the Scottish Government’s Directorate of Planning and Environmental Appeals, and we await the outcome with interest.

St Cyrus traveller site – in a decision which recognises the lack of readily available facilities for Gypsies and Travellers in Aberdeenshire (finding that the Council has failed to provide suitable sites), the Scottish Ministers have granted planning permission for a Gypsy and Traveller site near the St Cyrus nature reserve. The retrospective application, which the Council had voted to approve, was called in by Ministers due to an objection from SEPA regarding potential flood risk. This follows a previous call in and refusal of an earlier application for the same development in 2016, which the Council had also voted to approve. However, whereas the Scottish Ministers again concluded that the most recent application did not comply with the development plan and accepted that the site was at risk of flooding, this was considered to be outweighed by the hardship that would be caused to families currently living on the site if planning permission were refused. This decision provides a powerful reminder of both the human element of the planning system and the scope for material considerations, such as the human impact of planning decisions, to outweigh the development plan where the circumstances justify this.

Community led development – a number of community led development stories have been in the news this month, including: the purchase of 22ha of land in Lochinver by the Assynt Development Trust on which affordable housing, paths and commercial units are proposed to be built; the award of a grant to Applecross Community Company so it can build at least eight new homes for affordable rent; and the purchase of two more high street properties by the Midsteeple Quarter in Dumfries, which aims to redevelop these in a way that will “breathe new life” into the area as a place to live and work. We have long been advocates of enabling communities to not just have a say in what development takes place in their area, but also to bring forward and deliver the development they want to see, and these developments show the potential that this approach has!

Driverless cars – in the early stages of the first lock down our blog, Going viral, speculated on the potential for Smart Cities technologies to help address some of the challenges of living in a pandemic. In that, we recognised the role that autonomous cars might play, and this month it has been reported that these could become a reality in the UK by the end of this year. There does though appear to still be some way to go before appropriate rules and regulations are in place to ensure that the technology can be deployed safely and with confidence.

Post-Covid high street recovery – as we emerged from the first lock down, we then spoke to Adrian Watson, the Chief Executive of Aberdeen’s Business Improvement District,  about the particular challenges for our city centres and how they might be addressed (see Rising from the ashes). Those challenges have now been taken up by the Aberdeen and Grampian Chamber of Commerce (AGCC) along with the Edinburgh and Glasgow Chambers of Commerce, who have commissioned Brian Evans of Glasgow School of Art to update the Scotland’s Urban Age report, which was first produced in 2018, and looks at the future roles and prospects for the three cities, including exploring issues such as economic connectivity and place-making and technology. It is hoped that the new report will ensure that policy decisions made now will prevent our city centres becoming “urban deserts.”  City centres are, in the words of Russell Borthwick, the Chief Executive of the AGCC, “…finely balanced ecosystems of retail, culture, hospitality, residential and offices with people at their heart.  If any of these are out of balance then the others are likely to fail.” The final report is due for publication in the autumn and we look forward to seeing the recommendations in that.

In a highlight for us not just of the month, but of the time we have been in business to date, we were delighted to be named Small Planning Consultancy of the year at this year’s RTPI awards, the ceremony for which took place online last night. In a great example of adapting to current coronavirus restrictions, the online format provided a showcase of inspiring finalists from across the United Kingdom, with opportunities to network with other attendees as well as hearing the winners announced. In announcing our category, it was said that:

“Aurora Planning stood out to the judges due to their impressive and inspiring scope of work completed by a team of two within only three years of business. They have provided innovative solutions to unique projects, which has resulted in fantastic client feedback, and the judges liked their multi-disciplinary approach. The judges felt the team brought something different to the table and were blown away by their pro bono work in order to support local groups and the community. Aurora Planning epitomise who a small planning consultancy should be, balancing commercial success with social responsibility.”

We are genuinely honoured to receive this recognition, and hope to continue to build on this success in the future.

On which, if we can help with any aspect of the planning process, please visit our website or email us at info@auroraplanning.co.uk. Or, if you would like to see our other blogs or sign up for email updates, please click here. 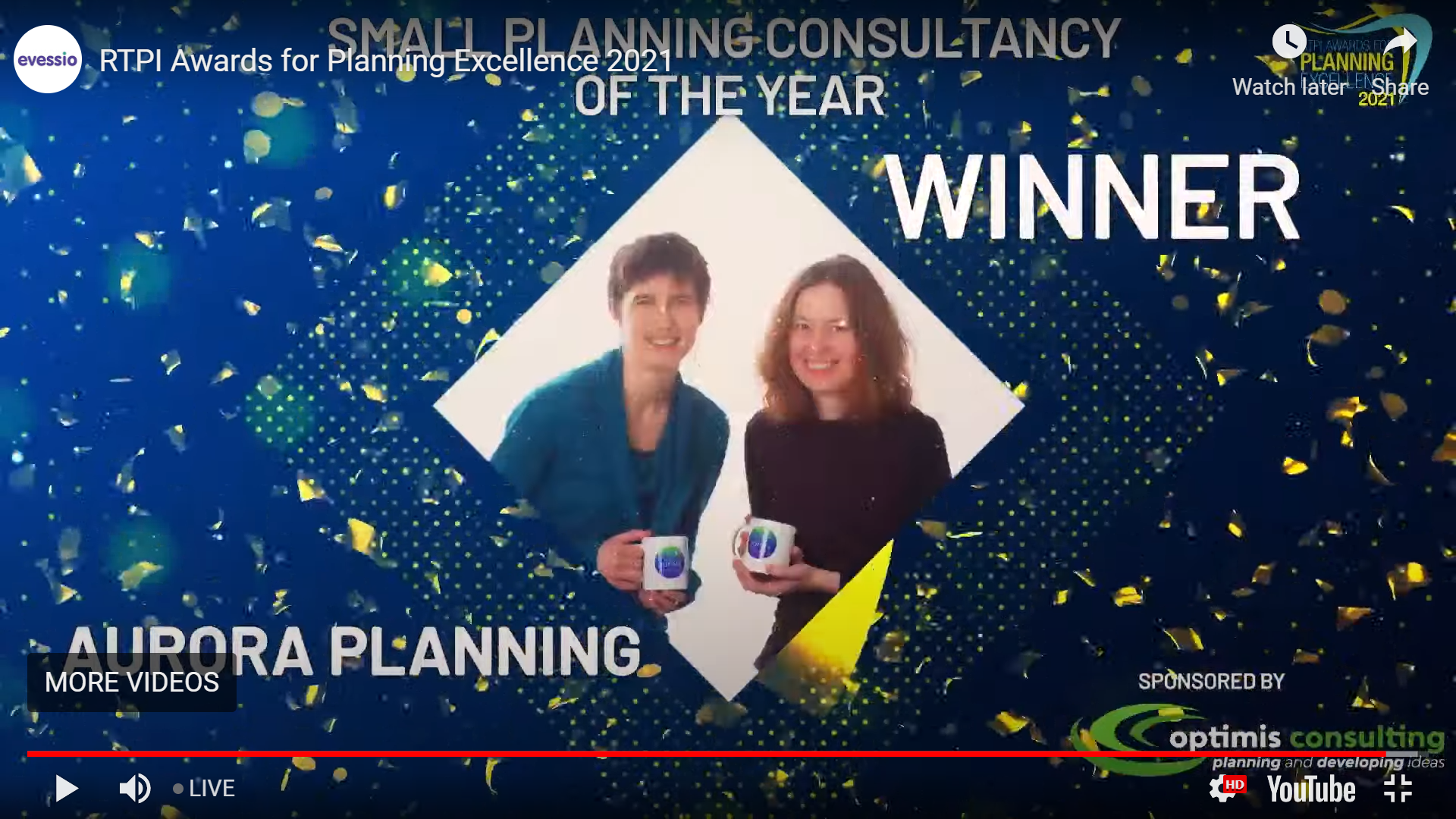